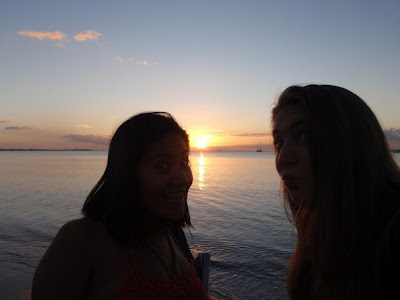 After dinner we met a German girl who sat with us for a while, turning out to be in our room. Tired, we decided it might be a good idea to sleep and went off to bed in our dingy little room. I took a shower first, entering a bathroom splattered with blood stains of what I hoped was from squished mosquitos. The shower was cold and instead of putting me to sleep, it woke me up. I then hopped into what I thought was a damp bed, before realizing it was just the odd material of the sheets. An hour later, I finally started to slowly fall asleep.
That was until... “Did you set your alarm?” I heard a soft voice say to me just as I had begun to drift off to sleep sometime after midnight.


“The alarm, did you set it?” Alex asked, turning over as she spoke.


“No, I asked. You had yours. Now you want a backup?” I was a bit ticked off at this point, finally on my way to sleep and now woken up for something we had previously discussed.


“Yes.” This was the last thing she said to me before making herself comfortable. Damn it all! I set my alarm, rolled over in a cranky manner slightly hoping to wake her up from her slumber she had already fallen into within the last 30 seconds. It didn’t work, I just lay awake for a while wondering what the next day would be like.
Posted by Jami Cakes at 11:48 AM No comments: Links to this post 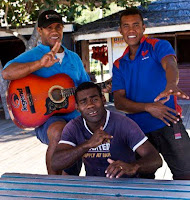 I wrote this letter to Fiji as I sat on the giant boat from Kourovou back to Denaru, knowing we were now leaving the islands, feeling heaps more sadness than I intended and expected.
-Last Day on the Islands-
I’m really not sure what to say. We have 1 more night in Nadi, yet if feels like at this moment, Fiji as I’ve come to love, is over, done, so quickly that within a single moment, I don’t even have time to orientate myself with what has just happened. Fiji has been this miraculous wonderland I dream of coming back to and I haven’t even left yet. 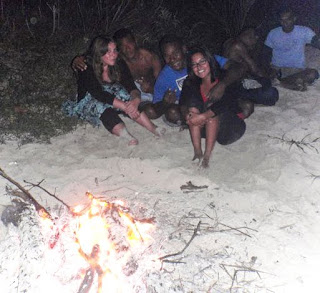 I’ve learned a lot in the past weeks. If you smile, there will be sun, hence the reason Fiji’s weather is phenomenal. Everyone is always smiling! When someone moves their finger across their throat as they’re looking at you, what most know to be “I will cut your fucking head off” the fijians mean it as a token of their love, “I would die for you”. Bonfire on the beach doesn’t actually mean a bonfire on the beach. I mean, there is a bonfire, but it’s key for “I want to get you alone.” However, kava in the caves, actually means kava in the caves, alongside 30 other fijians all droned out of their minds from the natural anesthetic made from the pepper tree, tasting like herbal muddy water. Nothing is as you expect it, everyone is genuine, and everything is on it’s own time, Fiji time.
The last 2 weeks have gone by like a whirl wind. It’s not like there have been so many new experiences though. I mean yes, I can now say I’ve kissed a Fijian, or 2. I’ve been to beautiful beaches, and snorkeled, but it’s nothing new, other than the place. However that’s the key reason to why this has been such an amazing trip. Within the last 2 weeks I’ve met an abundance of new people from all over the world, most of whom I hope dearly to stay in touch with. I’ve spent time with some of the amazing locals who run the joints in which we stay and make the trip so memorable. Without their kindness and open hearts, this experience could have been just that of a nice beach, but with the memories I have from it, the clear waters, green palms, and white sands are just the start.
Snorkeling with the manta rays and the look of excitement Alex had upon her face as she saw her first one. The laughs of the guys, a high pitched monkey like giggle, that even when I had no idea what was actually so funny, would spread like wild fire so even I began to laugh hysterically. I’ll remember the hymns they sang to us in welcome and goodbye, and the songs they used at every place to dance to! The hospitable attitude of the men and women trying to make sure that we have/had the greatest time possibly possible. Nene who snuck Alex an extra piece of cake, when every one else was told there was no more, and gave us giant hugs and goodbye lays as we left. I am not an emotional person, and I am most certainly not a crier, but this left me so touched, I had no words. 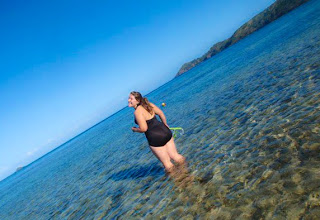 This is still only the beginning and I can’t wait to get back to this marvelous place of gorgeous lands, and even more beautiful people, to experience it again. And so as this trip ends, I can’t say moce to fiji, because I know I’ll be back. Instead, I’ll say, Vinaka and I can’t wait till I’m Bula’d into Fiji again.
Love to Fiji Always, Jami
Posted by Jami Cakes at 11:36 PM No comments: Links to this post