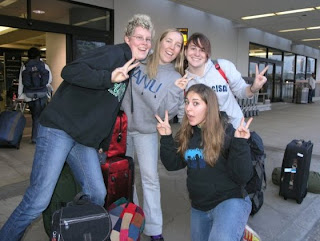 My neck is throbbing. Bags hang heavy and puffy beneath my slits I once called eyes, on top of which, there’s little to no eyeliner left. My lips are cracked, dry, nearly split. My stomach is bloated and I feel heavy and full. I’ve got a pounding headache, splitting through my temples on both sides; a slight bit of dizziness in the center of my brain. On top it all, I am not even sure as to what time or day it is, having just missed an entire day while traveling through the skies. I am slightly (that’s an understatement!) disoriented, confused and exhausted, and yet despite all of this, I can’t help but smile, becoming overly excited as the captain announces our descent into Sydney. 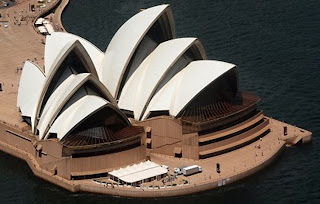 “This is so exciting!” Chenoa grins in pure bliss, and gazes out the window. This cheeriness awakens me even more, and we grin together like lovestruck thirteen year old girls at a Backstreet Boys concert. Chenoa holds her finger up to the window, pointing out a tiny white speck in the Sydney Harbor. She tells me what it is and after a good 2 minutes of squinting, trying to decipher the figure in the foreground, I am finally able to make it out. The white speck, reflecting the bright rays of sun cascading from the clear blue sky, is none other than the, you guessed it, The Sydney Opera House. Sometime in between gazing out the window and listening to the three Maori women (although I swear the mother looked like a man) to the left of me chew their gum like cows masticating on cud, we hit the floor, making a heavy bouncy, anything but smooth landing. I ignored it, just happy to know that after the last 16 hours of plane time, we would finally be getting off of the plane, out of the airport and into the fresh air, stepping into Sydney and the beautiful day it had portrayed through the open window panels of the plane.

This would all be, after we had gone through customs of course.

Now, Australian customs had been described to me, as some what of a scary venture. After waiting in long lines and receiving incriminating stares by serious, mean looking, large Australian custom guards, we would then have to declare our items. Our luggage would be searched and if we chose not to, it would be randomly searched anyway. To me, it sounded like a long, harsh, process I couldn’t wait to be over. I should have known, like always, nothing goes as my mind expects.

“But I need to go left.” I said to him, somewhat confused.

“Why?” he asked in a strong Aussie accent.

“Because I’m not an Australian citizen.”

“Well, today you are.” He responded, motioning me with a hand gesture towards the line with Chenoa and all of the other Australians.

“If you say so!” I thought to myself, still unsure as to what just happened.

Chenoa got through quickly, and then I was next, an adorably angry looking, no smiles woman sat behind the desk, gave me and my passport a quick stare down and then stamped me into Australia. We went to Carousel number 3 to pick up our large luggage and after 5 minutes, both of our bags had arrived. Now it was time for the scary part!

The last line before we were free. A woman at the end of the line asked us if we had anything to declare. Chenoa nodded telling her we had wood and candy and she sent us to the left line. A few minutes later we reached the front, where Chenoa handed a jolly older man her card of items being declared, explaining what she had and he smiled and motioned her to move on ahead where someone would check her bag. I smiled, handed him my card and told him I had the same. He once again motioned me to move on and I met up with Chenoa. Another man asked her what she had and she pulled out a tiny Russian Matroska doll I had given her and a bag of Hershey’s chocolate.

“I have the same thing.” I said to the man. He checked our forms and trusting what I was saying was the truth, or not giving a damn, he sent us both on our way. We were now on our way out! Walking with our things through the swarms of people in attempt to find both an ATM and Chenoa’s father; we seemed out of luck, not finding either. Walking further down the long pathway we finally came upon an ATM. Sadly I could not say the same for her father. Using my incredibly technologically savy and uncontrollable new phone, she called her father, who turns out was only a short minute and a half away, waiting for us with his companion, at the wrong exit. With money in hand and our ride now here, we were finally well on our way to get to Canberra, for a well deserved shower, or so we thought... turns out our ride had other plans!

Posted by Jami Cakes at 10:45 AM No comments: Links to this post