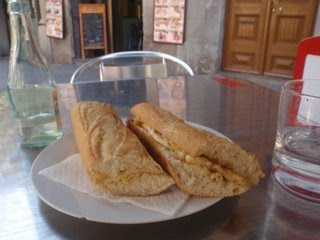 It’s Friday, October 16, 2009. Spanish class had ended and I am hungry. After taking a nice walk, and passing nearly two small bars per street over a 45 minute span, all of them serving Bocadillos, my hunger grew stronger and I decided that I had to have one of these “sandwich” looking things.
A few days prior, while walking to the supermarket, I had passed a woman sitting outside of a bar/cafe, reading her newspaper, a fried egg sandwich sitting on a white plate in front of her, crisp bread, a butter glistening egg stuffed in between it, she took a bite and set it down, as she enjoyed her surroundings in complete relaxation. I wanted that; what ever that was.

Upon passing all of these bocadillo bars, I would look quickly at the menus, many of them containing pictures, and realized what she had, was none other than a typical spanish dish; the tortilla in between bread. After going home, grabbing my wallet and heading out in search of where I would enjoy my first bocadillo, I had a few places in mind. I looked out across the street to see some umbrellas and green chairs in a shady quiet spot, and knew that was where I would be enjoying myself for a few hours. I quickly looked at the picture menu outside and pondered for a millisecond as to whether I wanted the tortilla with potatoes or the tortilla francesa; just a plain omlette. I decided to go as simple as I possibly could.

I walked into the small (empty) bar, housing two tables, four chairs and five bar stools. A few legs of proscuitto were hung and scattered around. An older Spanish man, probably in his mid 60's came out of the back kitchen with a smile on his face, happily greeting me . In the best of my terrible Spanish, I asked for the Bocadillo I had had my eye on for the last however many days, and he took my order, still smiling and asking me what I wanted to drink. Agua. He pulled out a bottle. I stood there for a second trying to think of how to ask him for sparkling.

“Um, como se dice los otro typo di agua?” What did I just say? He looked at me a look of utter confusion upon his face as he scratched his head. “Uh um, con gassa?” I tried again.

I went outside to sit, making myself comfy in a green pillow covered chair, until the man came out and walked to a different set of tables. There was apparently a separate bar next to him on the corner bend that I hadn’t realized and I immediately got up and moved. He set a bottle of sparkling water in front of me, smiled some more and went back inside. I pulled out my book to read. He returned, within a few sentences, placing a small white plate with two large sandwiches in front of me. Half of a long crisp baguette had been rubbed down with tomatoes, filled with a perfectly cooked omelette and cut in half, for my enjoyment.

“Tortilla, no esta aqui.” he said as he put the plate down. What? but I ordered a tortilla, you just brought me a tortilla, what do you mean no tortilla here? I raised an eyebrow.

“Que es?” I asked curious as to what I was eating then.

“Solo aqui, no alla.” He said again, pointing to the bar next to him I had accidentally sat at. Oh right. They don’t have tortillas, only he did. I nodded and he walked back inside once again, continuing to smile.

I was not sure as to how I would eat this much, expecting only one of these, but I would give it my best shot. A napkin lay under the sandwich and I remembered walking past street side eaters in Italy and Spain, seeing them using the napkin to hold the sandwich. I followed their example, wrapped the first half in the white paper napkin, picked it up, adored it with my eyes for a moment and then took a large bite. I now knew why the little man was so happy. I couldn’t help smiling from ear to ear, cheek to cheek, more and more with eat bite; I just couldn’t stop.

The pure deliciousness of it all was almost too much for me; It was exactly what I had wanted. But how, how could something this simple be so good one might ask? Because when you do something right, it turns out amazing, no matter how simple. Crispy crust chewy soft center french bread, rubbed with sweet raw tomato and covered in a fluffy, buttery, perfectly cooked omelette. At this moment, sitting in the small metal chair looking out at La Calle Comte D’Urgell in Barcelona, holding one of Bourdain’s books in one hand and my sandwich in the other, I couldn’t have been more content.

The wind blew, the streets were quiet with only the sound of passing traffic, the sun shown down; I had finally gotten what I wanted. With the first half down, I was getting full, but I mustered on, taking off a good portion of the bread from the second half of it, getting more buttery egg to bread ratio with each bite.

Finished. I looked down at my plate to see a crumpled napkin and a few pieces of ripped bread. After reading a few more pages of my book and enjoying the surroundings, I picked up my plate, brought it inside and got my check. I left a tip, which made the guy smile even more, and as I walked out with a "gracias", “Muchos Gracias!” was shouted out after me. I was still smiley.

Its after life’s simple pleasures, each and every time, that I began to think of how sometimes, I just love simplicity, and for me, these are life’s most simplest and most delicious food pleasures, always leaving me with a smiley on my face and a happy belly.
A jar of peanut butter
A crisp heirloom apple
Blueberries off the bush
La Ricotta
Sashimi off a just killed fish
Slow cooked meat
Garbanzo beans
A chewy crispy chocolate chip cookie
Espresso in Italy
Handmade pasta
Anything baby... animals, or vegetables
Melon at the peak of its season with salty prosciutto
Just picked corn, roasted over a grill, covered after in butter
La buratta
Dumplings
Pico de gallo and hot, seconds out of the fryer, tortilla chips
A perfectly cooked egg
Warm bread and cold butter, melting into the light doughy middle
Good hazelnuts
Greek yogurt and honey
Fried plantains
Sweet cherry tomatoes straight off the vine
Chocolate chip ice cream
A good watermelon in the hot summer months
Lobster and Clam bake back east
Arugula from the garden with olive oil, salt and parmigianno
Unpasturized Brie
Le Granite
Taco trucks and all of their marvelous deliciousness
Tres leches cake
Fresh shell fish, lightly sauteed, served in a large bowl with just olive oil, sea salt and parsley
peeling and picking with each bite and soaking all of the juices up with crusty bread.
And what inspired this all... The bocadillo di la Tortilla Francesa

Here are just a few pictures... 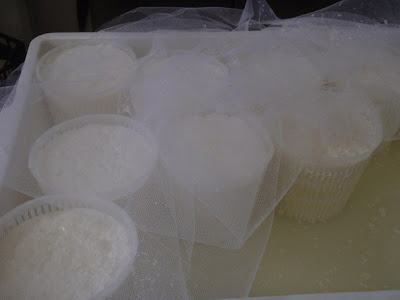 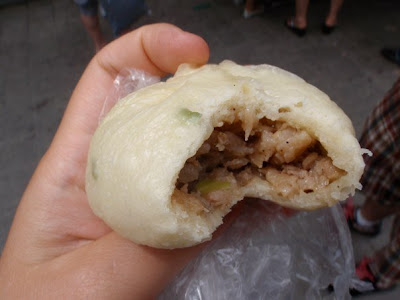 Best dumpling of my life 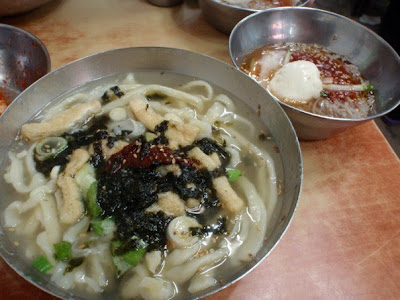 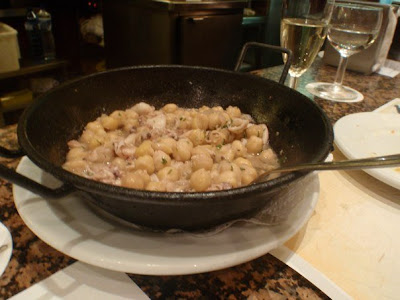 Stewed garbanzo beans... and baby cuttlefish.. a combo of 2 of the best things. 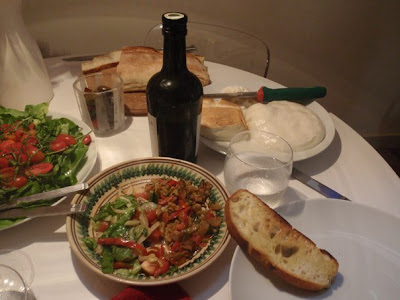 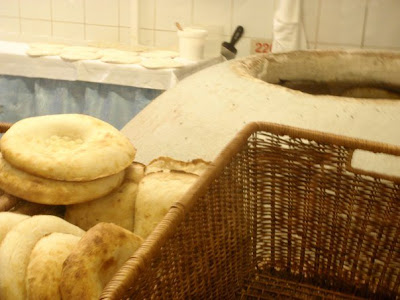 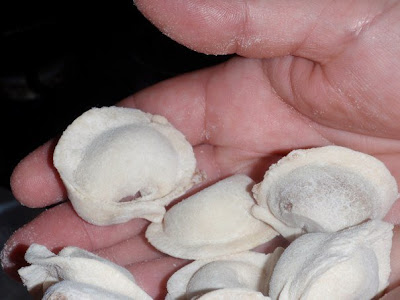 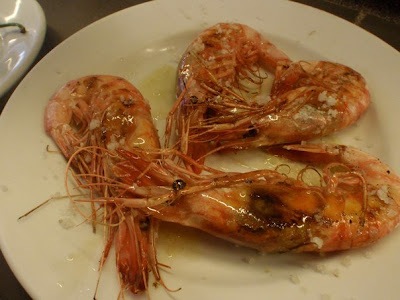 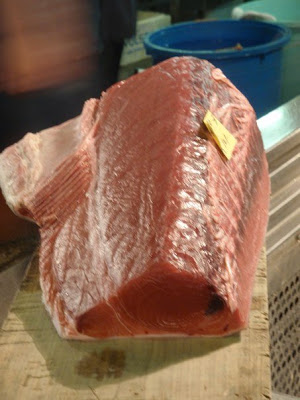 Posted by Jami Cakes at 8:56 AM No comments: